Book of the century

Simply the best prose you will read in the next couple of decades at least.

Listen to the Guardian Podcast and then buy the book here.

You will not regret it (or your money back).

If I have to keep cleaning up this blog I’m going to trash it completely.
Despite the maintenance I do regularly there are still rafts of smart arsed robots insistent on posting junk behind my back. Grrr…

If the police IT forensics people were checking my alibi for last night they might have thought I was lying when I said I was at home in bed (with my real alibi – the wife).
Twitter sent me an email notification to say that an android device had accessed my account from Bury Saint Edmunds (down in the East Anglia area last time I looked at a map) over 250 miles from here.
It was me who logged in to the twitter account (on my Samsung Galaxy Edge 7 – what a beauty!) but I was really not down country your honour.

Posted in Software, Trivia and stuff | Leave a comment

The Man Who Was Thursday

According to my Kindle I am 57% of the way through G.K.Chesterton’s “The Man Who Was Thursday”. Whilst I am enjoying it, there are times when I need a change.

I put the Kindle down and picked up the Sunday paper to look at the books review section. The first one I read was “City On Fire” by Garth Risk Hallberg who is hailed as the next great American author destined for the pantheon of literary giants, so I picked up the device again and requested a sample (that’s the bit I love most about the Kindle).

On opening the sample, it took me not to the cover, nor the contents, nor ‘about the book’, not even the prologue, ‘about the author’ or the dedication, but to a page sandwiched in between.

With the font set as I have it for my weakening eyes just two paragraphs where showing (a quotation as it happens), the second of which referred to a person called “Syme”. The frisson anticipating the page turn was marked. It simply has the end of the quote (tree”) and the credit:

A blast from the past

I found this cartoon in an old folder from about 25 years ago. It still makes me laugh.
I had to re-work it in photoshop and apologise to the creator as I don’t know who it is. 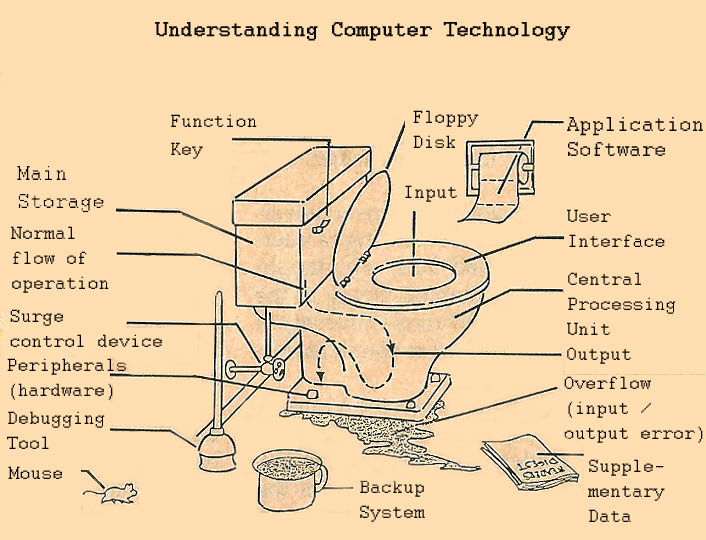 Quality newspapers are not just for the intelligentsia

The wonderful Northern family owned Booths supermarkets (since 1847) have a number of great loyalty bonuses including free tea  and coffee (you don’t even need to buy anything!) and a free newspaper on Saturdays and Sundays if you spend more than £10. So picking up a Sunday Times for example is a saving of £2.50 (the current cover price).

I was at the hand basket till point on Sunday and a young girl in front of me had a few items together with the Weekend Financial Times which looks like it weighs in at the sumo end of the scale. The chap serving glanced at her and asked “is that for you?”, pointing at the FT, to which she replied, “actually it’s for my rabbit”.

My lifestyle and physical exercise are words that really shouldn’t exist in the same sentence, that is until now.
There’s no denying the ageing process and there comes a time when you realise that there are certain things you’d like to do before the point is reached when it is simply no longer practical or even possible. Getting (and keeping) fit becomes more important as time presses on, not only for longer term health and wellbeing, but is essential if you decide to undertake a physical challenge.
Save for the odd game of table tennis this past couple of years I rarely do anything to break into a sweat (tackling the weeds with a strimmer in the two days of summer raised the temperature somewhat but was hardly a gym workout). Most of my time is essentially spent seated. When I’m not asleep (an extension to sitting down) I am usually found at my desk either working or avoiding working. If there was an award for surfing (the Internet) I’d surely be a favourite for a place on the rostrum having been online nearly a quarter of a century (since shortly after the first UK’s first dialup company Demon Internet launched in 1992).
Back in the day (as the oft used phrase has it) I was sporty, playing squash several times a week as well as five a side and full team football. That was until two of the discs in my lower back crapped out. Surgery in those days was not so sophisticated and my operation was not the success I’d hoped for. Sport was out and I still suffer from back pain on a permanent basis.

That’s the background. So what?

After my biennial trip to the USA in earlier this year I spent a few days walking in the Cotswolds with my SoftDev cohorts Vince and Dave. It was enjoyable, exhausting and painful. It was also something of a wakeup call. Covering twelve miles in a day ought to be a walk in the park (or the Cotswolds) but it felt like I’d run a marathon (not that I have, so I don’t actually know if it was like it at all).
I’d previously thought of taking up running with a view to finding out what it really was like to run a marathon and had set a goal of doing so two years after training started.

Not one to avoid a challenge I have set myself a new goal for 2017. Still using two legs, I have added two wheels in the form of a touring bike and have committed to cycling from Land’s End to John O’Groats less than two years from now. LEJOG as it is known (pronounced Lee Jog) or JOGLE if you choose to bike it from North to South, is the classic UK cycle ride.

I (re)discovered I love cycling.

Before I can tackle the ‘End to End’ I not only have to get fit (and in particular bike fit) but I’ll need to complete some smaller routes such as the C2C (or Sea to Sea), The Way of the Roses and Hadrian’s Cycleway, all of which fortunately are located broadly speaking in my part of the world. Naturally those routes have to be preceded by regular and consistent training. I started training on the first day of August in a very modest way at just 10 miles per session with an average speed of around 12 miles per hour.

At the time of writing this (not quite at the end of the month) I have covered 250 miles and  have this week, increased the distance to 15-20 miles in sessions of between 1.5 and 2 hours. So far so good. ‘From little acorns’ and all that. Not to be scuppered by the impending end of season (don’t forget I’m in Cumbria where is it wet and cold) I bought a turbo trainer for indoor use, so there really is no excuse to halt my training (I might get to regret these words).

In order not to become a bike bore here (since this is my long surviving blog for random if infrequent postings) I’ll shortly be starting a blog specifically for the ‘end to end’ saga. Naturally I’ll be throwing in bits and bobs on Facebook, twitter etc but if you are remotely interested in following my progress (and hopefully the LEJOG itself) I’ll be plugging the bike blog starting in September.

Caller: Can I speak to Mr Kirkby
Me: There’s nobody here of that name, sorry
Caller: Mr Stephen Kirkby
Me: No sorry you have the wrong number
Caller: Is that The Software Development Company?
Me: Yes
Caller: Sorry  I must have been given the incorrect personal details

Caller: I’m ringing to offer you some excellent free marketing services exclusively aimed at selected companies in Yorkshire
Me: That’s handy as I am not located in Yorkshire – Goodbye …

Blog restoration (no thanks for the hack attack)

Well I guess it is partly my own fault for not blogging since April of this year as I clearly don’t then have an eye on a ball so to speak.
Two of my wp pages were hacked resulting in a server 500 error (and obviously I have cleaned that up and upgraded wp to the latest version).
It is such a pain to have to keep control of scores of sites just to stop the hack attacks but I guess that’s the name of the game…

403 Forbidden: The server understood the request, but is refusing to fulfill it.